Game Theory deals with the analysis of “games” (i.e., situations which involve conflicts of interests or various solutions).

The branch of mathematics concerned with the analysis of strategies for dealing with competitive situations where the outcome of a participant’s choice of action depends critically on the actions of other participants. Game theory has been applied to contexts in war, business, and biology.

• GT is a very democratic method of problem solving.
• It allows all participants to equally have their input heard
• The input is then collated and refined
• Ranked Balloting then determines each participant’s choice
o Ranking occurs by first choice having the highest value and so on
• The ballot results are then published
• Further Benefit and or Risk Analysis(by each participant) can be undertaken with respect to various criteria such as costing, timing, impact to business etc
• The benefit/risk analysis results can be attached to the initial GT analysis for final decision choice

For Game Theory to be successful, there needs to be meaningful follow up. 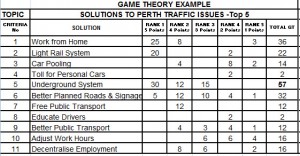